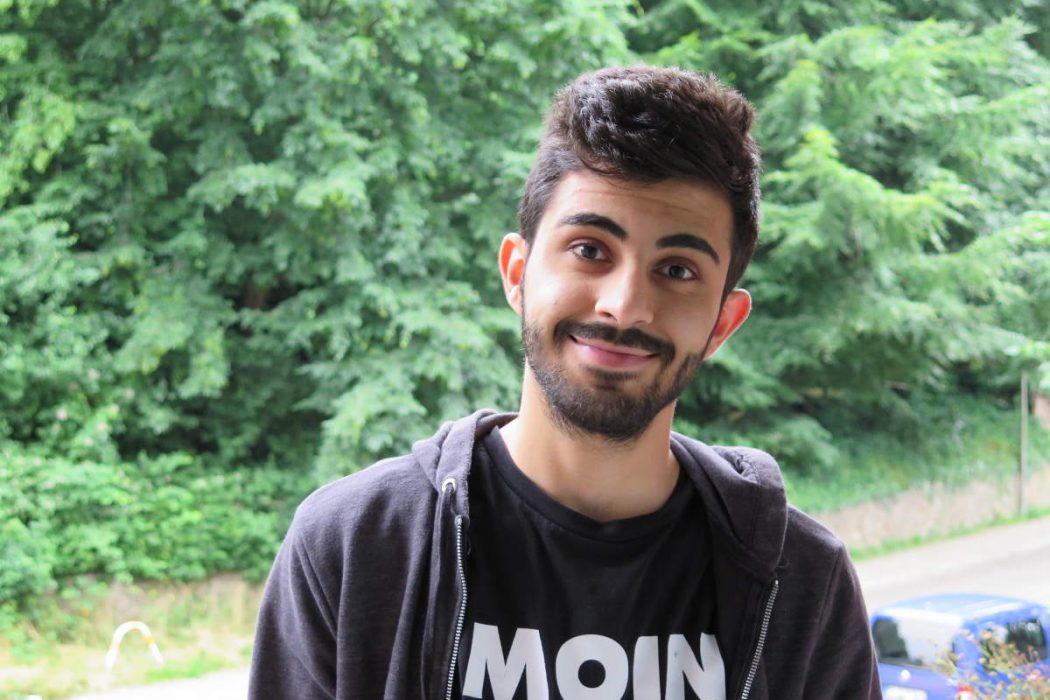 Hi Amed, how do you feel? What happened since the last two stories in Jungle World and Welt?

Hey David. Yeah, many things happened after the story was published in these two papers. I got a lot of reactions. Fortunately, most of them were positive. I get support from a lot of people. But some people are really angry at me and are even trying to hurt me since the story got so much attention. I don’t feel really safe anymore. Sometimes I do believe I will never be safe again anywhere.

Reiner has been always the neutral person in that conflict. He has always tried and still tries to find out what exactly happened there at that day. The current head of the Flüchtlingshilfe and some other people from the organization don’t want to find the truth. They say that my opponent is too important for them. Reiner is disappointed and wants the head to step down because her lack of neutrality. In his opinion this missing ability to handle conflicts is destroying the Flüchtlingshilfe. Regardless of what happened that day he thinks they should have taken me seriously and he wants them to apologize to me! But I don’t think they will ever do that. I had a meeting with the head after she read my open letter. She was not interested in hearing any details and just told me that she is banning me from the house to keep everyone safe in the organization. This is ridiculous. I have never been violent or aggressive.  I have the impression she is not taking me seriously at all. And I even heard that she has been telling people that I might just be sick in my mind and made everything up. She has simply decided on her version of the situation. And I don’t think that she has ever watched the surveillance video that shows the attack.

What were those reactions like specifically? I saw Michael Schmidt-Salomon expressed his solidarity. So many reactions came through the internet? What is it like in Flensburg, offline? Do you still get threatened?

It was very special with the support from Schmidt-Salomon. His children’s book »Wo bitte geht’s zu Gott? fragte das kleine Ferkel« was one of the first books I read in German. And it is really my favourite. It means very much to me with support from so many different people from all over Germany. But here in Flensburg it is not the same. Sure there are people asking how I am. But you cannot compare the reactions with the ones I get in other places where people are much more aware of the problems in Muslim communities.

And I get a lot of negative reactions. People are not greeting me anymore and look at me like at a criminal. I have also experienced it with some of the Germans involved but it is mostly Arabs reacting that way. Is it a crime not to believe in Islam anymore or to say it publicly or to report a murder threat to the police? I feel that it is seen as a crime in some place like in the quarter Neustadt-Flensburg. I try to avoid the place because I don’t feel safe there anymore. I just don’t feel free anymore! Not even free to write what I want on my personal Facebook account!

So you feel like you’ve been and are being punished for leaving the group and criticizing Islam, right? What are the people who threaten you saying? Why are they threatening you?

Two days ago I met a Kurdish friend of mine. I said hello and he just looked at me very angry and told me to stop to write about Islam on Facebook and that he would kill me and send me to hell if I wouldn’t stop. Fortunately, I was not alone. I was together with two Muslim friends who brought me home safely. I have a few good friends in the community but the main part of the Muslim community in Flensburg has a really bad image of me. They claim that I fight against their religion and have no respect for them and their faith. I have just criticized the religion. But I am not fighting against the faith of anyone. I respect the people and they are free to believe whatever they want. But I want them to respect that I don’t believe. And they have to accept that critisism is a basic human even criticism of religion. I am not disrespectful towards any people in personal. But for them I am a kafir.

And kafir means what? That you are not a human anymore? Because I personally do not believe in a god, too. Does that mean, that I am less worth than people who believe in Islam?

Muslims use that word kafir for people who don’t believe in Islam and it is actually a bad word. It isn’t neutral like non-believer. But it will not be the same for you. It is more often used for ex-Muslims, people who have left the religion. There is a Hadith saying that the prophet Muhammed says: “Who leaves Islam, Muslims are allowed to cut their head off”. Radical Muslims use that word for all western people. But as an ex-Muslim you will also be called kafir from non-radical Muslims!

And that is exactly what the guy said to you, right? He threatened to cut your head off. Is he an islamist or just a normal guy?

He is a normal guy! He is even married to a Christian woman! He told me: “I am going to cut your head and take it with me to Yemen even if it would be my last day in Germany. You are a kafir and to shed your blood is halal. Killing you is halal and who does that goes to the paradise.” And he was telling me that I am a disrespectful guy and that I write against Muslims and display them as negative people. I wrote an article “Atheismus als Fluchtgrund” and it was published in a refugee magazine. This started the whole conflict.
In that article I tell how happy I am for being in Germany. That there is freedom here and that religion is a private thing. And I tell my story from Kurdistan, how I was imprisoned and tortured for not believing in Islam. The article was published a few days before the attack where he suddenly attacked me while I was translating for some refugees at Flüchtlingshilfe.

And right now you are looking for someone who can lip-read the video of the surveillance camera that you can prove he really threatened you. I read the police do not believe you and you would like to prove that you do not lie.

Yes. I have already found two persons for that. And hopefully, I will get a lawyer via the Zentralrat der Ex-Muslime. I am going to prove that I have been threatened with death at that day in this organization and that the police and the court have made a big mistake by ignoring that. The video is without sound but it shows very clearly how that guy is suddenly attacking me and how angry he is afterwards. The video is just very clear and in a great quality but without sound. But I will get proof nevertheless. It is not that I want the guy to get punished. All I want is an excuse. I want to show the people in Flensburg that I have told the truth and have been victimized.

Is there a way that people can help you or any message that you have? What do you need right now?

I just want to thank everyone who is supporting and helping me with finding the truth. It just makes me feel much better with all those people who are not leaving me alone with that. And I hope that my case will be an eye-opener to some. I think it is important to discuss these problems in the media because we as ex-Muslims are not safe anywhere. I hope that this kind of conflicts will be taken more seriously especially by the court and the police – but also by people working with refugees.

Thank you for your time!